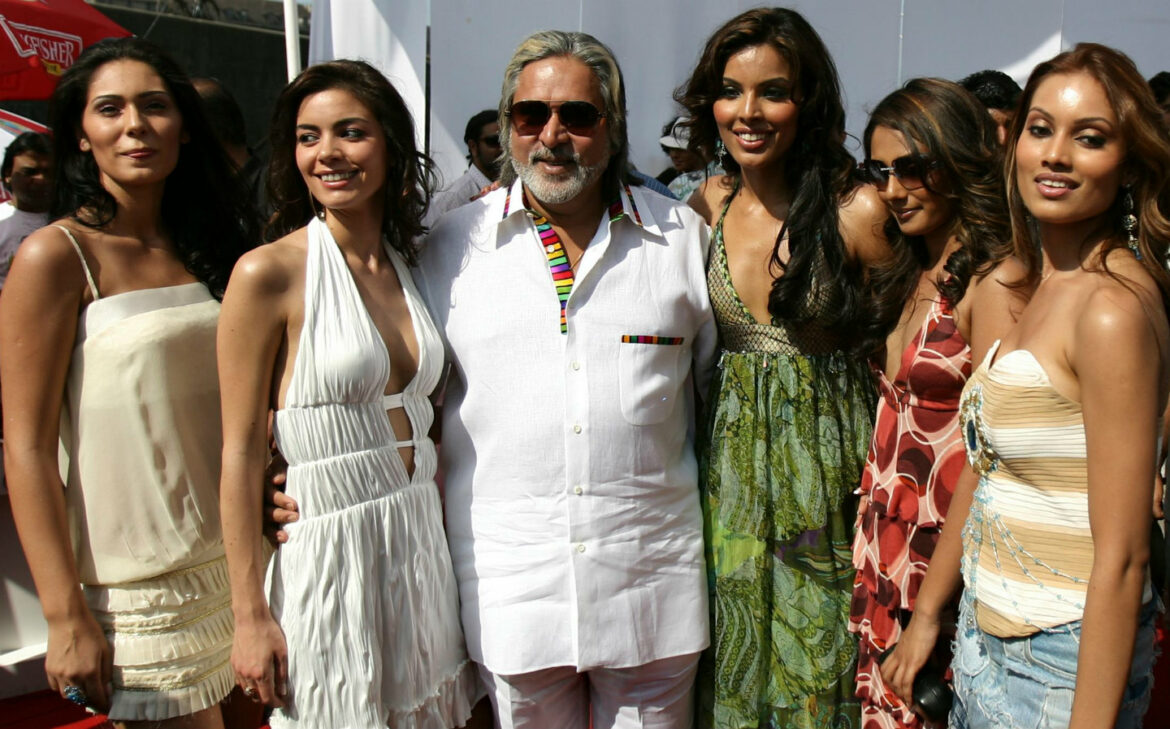 The socioeconomic status of his family helped Mallya secure the most prestigious private education available in the country.

He graduated from St. Xavier’s College in Kolkata in 1976 with a degree in commerce and soon after joined his father’s company, the United Breweries Group. The group appointed the 28-year-old Vijay as the chairman after Vittal Mallya passed away in 1983.

In 1986, he married Sameera Sharma, an Air India flight attendant, and together they had a son, Siddharth Mallya, who was born on 7 May 1987. The couple divorced shortly afterward but remained on good terms.

The UB group started flourishing under the leadership of Mallya, witnessing a booming increase in the annual turnover rate. The conglomerate purchased Berger Paints and Best and Crompton in 1988, followed by the acquisition of Mangalore Chemicals and Fertilizers in 1990.

By the ’90s, the Indian millionaire had become one of the most talked-about businessmen in the country. In June 1993, he married his childhood friend and current wife, Rekha, and the couple gave birth to two daughters, Leanna and Tanya.

The Launch Of Kingfisher

With the launch of Kingfisher Strong in 1999, Mallya revolutionized the Indian spirit market. The liquor baron had now officially brought strong beer consumption to a national scale with a beer brand that is still the largest selling and the most valuable one in the country.

The turn of the century brought further success and eminence for the Indian millionaire. 2001 saw him taking over The Asian Age newspaper and Rifa Publications which owned the Bollywood gossip magazine, Cine Blitz.

In 2002, the industrialist was elected to the upper house of the bicameral Parliament of India, the Rajya Sabha as an independent candidate from Karnataka with the support of Congress and JD (S).

On the 18th birthday of his firstborn, Siddharth Mallya, he launched the Kingfisher Airlines with a fleet of four leased Airbus A320-200s. The airline group offered a premium offering in an era of budget airlines. This was the year 2005 and according to many critics, the launch of Kingfisher Airlines was the beginning of the end for the Indian millionaire. The year also saw Mallya taking over his biggest local competitor, Shaw Wallace and Co. Ltd.

The takeover brought in whisky brands such as Director’s Special and Royal Challenge under his wide umbrella of holdings. The deal also kickstarted an exorbitant acquisition spree; liquor brands such as Herbertsons Ltd and Bouvet Ladubay SAS were subsequently purchased in 2006. Mallya merged all the liquor firms under OB Group into a new parent company called United Spirits Ltd in the same year.

2007 saw him acquiring alcohol brands such as Whyte and Mackay and Liquidity Inc. The liquor tycoon also bought a large stake in the Formula One team, Spyker. The racing team was subsequently rebranded as Force India.

Since its inception, Kingfisher Airlines had been targeting a premium segment of customers who expected luxurious air travel. However, in 2008, the airline merged with the debt-ridden low-cost-carrier, Air Deccan, and incorporated a low-cost travel class to its offering.

The merger diluted the brand status of KFA and degraded its premium image. Furthermore, it also put a financial strain on the already loss-ridden finances of Kingfisher Airlines whose debt now touched INR 934 crore due to the recent spike in oil prices.

Meanwhile, Mallya continued his extravagant spending with the formation of UB City, the new headquarters of the UB Group, and founding one of the cricket franchises of the Indian Premier League, the Royal Challengers Bangalore, for a staggering $111.6 million.

Even though Mallya was unable to back the promises he made during his first term and was even accused of bribery and corruption, the Indian millionaire won his second bid at Rajya Sabha in 2010 with the backing of BJP and JD(S).

His political influence helped him finance the debt of Kingfisher Airlines even though it continued bleeding cash. By 2011, the airline’s accumulated losses reached more than 50 percent of its net worth, while the debt figures jumped to INR 7000 crore.

KFA was knee-deep in a pit of debt and crisis when 2012 started. With half of its fleet grounded, several members of its staff on strike due to unpaid salaries, and its bank accounts frozen by the Indian Income Tax Department, the airline found itself at the centre of the biggest and the most notorious debacles ever witnessed in the Indian business scene.

The Collapse Of Kingfisher

Ultimately, Kingfisher Airline’s licenses to operate were revoked and the business was termed as insolvent. The Kingfisher collapse led authorities to accuse Mallya of being a “willful defaulter” under Indian law.

He was also charged with accusations of money laundering and was forced to step down from his post of chairman of United Spirits Ltd with a severance cheque of $75 million. The payment, for obvious reasons, has been blocked by Indian courts.

In 2016, a consortium of 13 banks to whom Mallya owed money submitted a plea to the Supreme Court to stop him from escaping the country. The businessman turned fugitive, however, had already escaped to his estate near London, England.

Due to the serious controversies attached to his name, the Rajya Sabha ethics panel declared that Mallya should no longer be a member of the House. However, one day before the panel was set to meet again to put forward his expulsion, Vijay Mallya resigned from his post as a Member of Parliament.

In subsequent years, the Indian government termed him as a ‘fugitive economic offender’ and continually requested his extradition. The principal debt of INR 5,000 crore kept piling on due to the surmounting interest and currently stands at INR 12,000 crore.

With his assets frozen and his final appeal against extradition quashed, Vijay Mallya stands to be extradited as soon a “secret legal” matter is resolved.

Vijay Mallya became to big for his boots, he took a much bigger bite than he was able to chew. His empire was established rapidly and also collapsed rapidly.

Vijay borrowed more than he was able to pay back. The started to pump excessive cash into a sinking business. He was not concerned about the profitability of the business, all he wanted to do was live the good life.

Everyone wants to live the good life, but not on the expense of others. He knew that the debts were too big to ever pay off.

The extravagance of owning a formula one racing team and an airline on borrowed money was short lived. He managed to have a good time for a few years mingling within India’s high society.

The money and fame blinded him from honesty and integrity. He became selfish and wanted to live a life of luxury at the expense of others. His dream was eventually shattered and now he faces many nightmares ahead of him.

Honesty and integrity are essential ingredients that will keep you at the top. You should never compromise these values for short-term gains.

Don’t sell your soul to try and create a life of luxury, as the price that you will have to pay in the end will be massive.